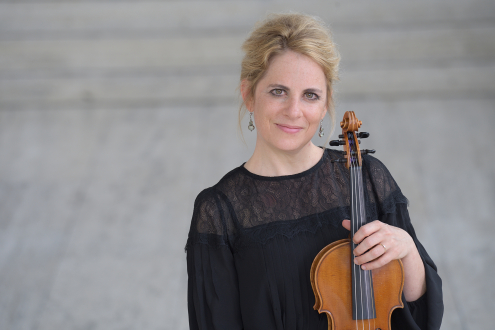 Regine Schmitt has been playing with the Frankfurt Opern- und Museumsorchester since 2008. She studied with Max Speermann and Prof. Herwig Zack in Würzburg. She gained invaluable inspiration from Salvatore Accardo in Italy, Yfrah Neaman in Bulgaria and the Voces Quartet in Rumania. She has appeared as a guest with orchestras including the Bamberg Symphony, the Munich Philharmonic and Pärnu Festival Orchestra in Estonia and been a member of the Bayreuth Festival Orchestra since 2017. She has appeared at places including the Mozartfest in Würzburg, Musikwochen in Millstatt, Musikfestival in Eltville, Kammermusikfest in Kreuth and Tirol Festival in Erl with her ensemble Amici Ensemble Frankfurt and Lutz Koppetsch & La piccola banda. She indulges her love for contemporary music with the Trio Comet – violin / saxophone / piano – which has resulted in 30 works being performed for the first time. Regine Schmitt has taught youth projects run by the Opera Festival in Heidenheim, in various musical institutions in South America, at the NRW Orchestra Centre in Dortmund and Klang Labor. She is also a tutor at Oper Frankfurt's Paul Hindemith Orchester Academy.