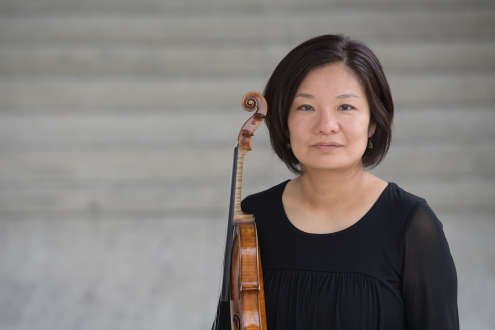 Japanese born Nobuko Yamaguchi started learning the violin when she was six years old at the Toho Gakuen School of Music in Tokyo, joining the first violins at the Taiwan National Symphony Orchestra when she was 18, but returning to the Toho Gakuen School after a year to continue her studies, graduating four years later. Inspired by a summer course with a string quartet in France, she moved to Germany in 2001, furthering her studies with Prof. Walter Forchert at the University for Music and the Performing Arts in Frankfurt. Curious about performing early music properly, she studied further with Prof. Petra Müllejans. Masterclasses run by people including Igor Ozim, Zakhar Bron and Toru Yasunaga rounded off her studies. She is also passionate about chamber music and took part in masterclasses held by the Tokyo, Cleveland and Bartók quartets. She played with the Staatstheater in Kassel's orchestra, the Bamberg Symphony and SWR Synphony Orchestra before joining the second violins at the Frankfurt Opern- und Museumsorchester in 2007.