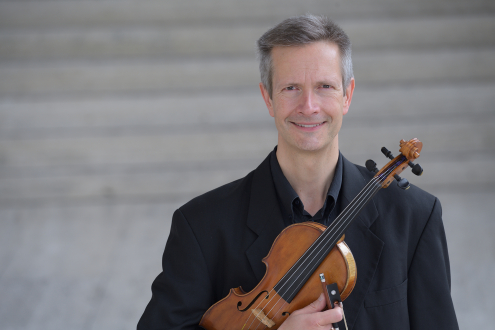 Frank Plieninger had his first violin lesson when he was five years old. He studied at the Folkwang University for Arts in Essen and University for Music in Karlsruhe. During his time in Essen he studied chamber music in Düsseldorf and with the Alban Berg Quartett in Cologne. He was a prize winner at Germany's National Youth musiziert Competition, the Gummersbach Violin Competition and Charles Hennen Chamber Music Competition in the Netherlands. Frank Plieninger joined the Frankfurter Opern- und Museumsorchester in 2003, after several years spent as deputy leader of the second violins at the Hagen Philharmonic. He devotes a lot of voluntary time as a member of the Frankfurt Telemann Gesellschaft e.V., teaching amateur and youth orchestras and as a juror for Germany's Youth musiziert competition.