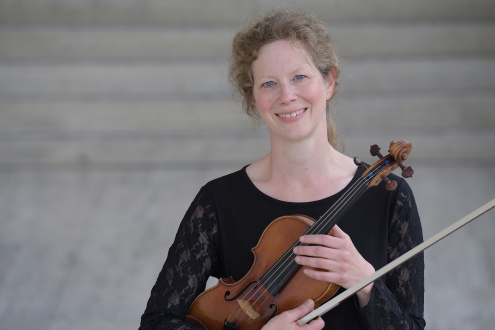 Donata Wilken studied orchestral music in Karlsruhe and the University in Cologne, where she received her diploma in 2001, the year she joined the Frankfurt Opern- und Museumsorchester. Baroque music is just as close to her heart as operatic repertoire. She graduated from studies in historical performing with Prof. Petra Müllejans (baroque violin) at the University for Music in Frankfurt in 2007. She is a member of the Colorito Ensemble, which specialises in authentic performing, and has taken part in concerts all over Europe. Their first CD, Affetti Musicali (released in 2020) was enthusiastically received by the press. Donata Wilken has been involved in all sorts of projects for children and young people for many years. As a member of Laterna Musica, she developed so called Ohrwurm (tunes you just can't get out of your brain …) Concerts, which thrill audiences all over Germany.