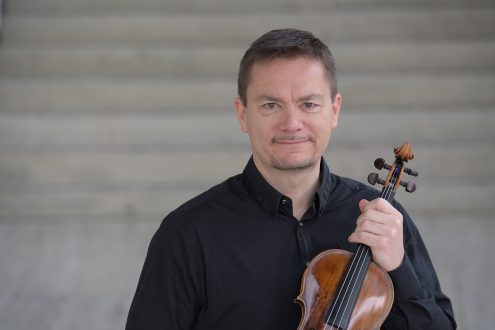 Jörg Hammann was born in Ludwigshafen and studied with Prof. Uwe Martin Haiberg at the University of Arts in Berlin and Prof. M. Ericsson in Oslo. During his studies he appeared with the Norwegian Chamber Orchestra and Oslo Philharmonic Orchestra. He joined the London Philharmonic Orchestra in 1998 before moving to the London Symphony Orchestra in 2002, where he played for nearly 20 years under chief conductors Kurt Masur, Sir Colin Davis, Valery Gergiev and Sir Simon Rattle. In London he was able to indulge in his versatile artistic abilities: taking part in recordings for films including The Lord of the Rings, Star Wars and Harry Potter, tours with jazz greats and composers including Chick Corea, Herbie Hancock, Dave Brubeck and Lalo Schifrin. He also took part in conducting masterclasses held by Jorma Panula, Trevor Kirk and Mikhail Jurowski. He joined the Frankfurt Opern- und Museumsorchester as leader of the second violins in the 2017/18 season.