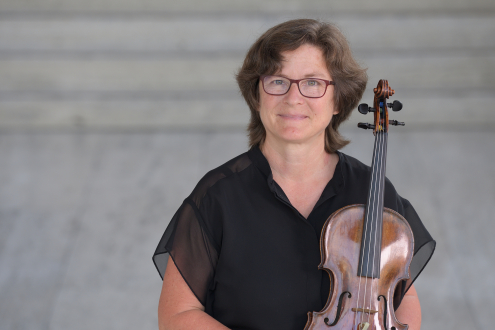 Guntrun Hausmann studied violin and chamber music at the University of Music in Leipzig with Prof. Gerhard Bosse. She joined the Frankfurt Opern- und Museumsorchester in Frankfurt in 1989, where she has led the second violins since 2011, after time spent with the MDR Symphony Orchestra in Leipzig and NDR Symphony Orchester in Hamburg. She has performed as a guest with other orchestras including the Gewandhaus Orchester in Leipzig, Gürzenich Orchester in Cologne and NDR Elbphilharmonie Orchester. She was a member of the Festival Orchestra in Bayreuth in 2002 and 2004. She also worked in depth on how to play the baroque violin during masterclasses held by Stanley Ritchie. These resulted in invitations to appear with the Balthasar Neumann Ensemble.