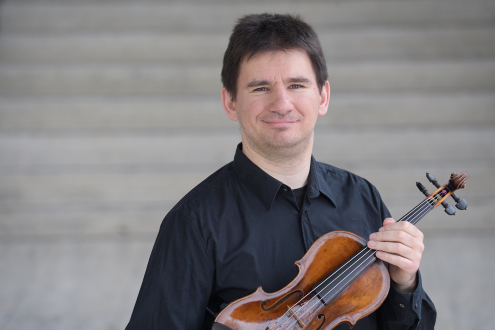 Tsvetomir Tsankov studied the violin in his homeland of Bulgaria with Blagorodna Taneva and then Prof. Mintcho Mintchev at the Folkwang University in Essen from 2003, graduating with distinction. He also studied chamber music with Prof. Andreas Reiner (Rosamunde Quartet) and the baroque violin, while studying for his masters, with Prof. Mayumi Hirasaki. He gained further invaluable experience during many masterclasses run by people including Zakhar Bron, Pinchas Zukerman and Reinhard Goebel. He won prizes at many international competitions in Czechoslovakia, Rumania and Bulgaria and appeared as a soloist with the New Philharmonie Westfalen, Sofia Soloists and several symphony orchestras in Bulgaria. He was a member of the Essen Philharmonic, Duisburg Philharmonic, the Bayerische Staatsoper München and WDR Sinfonieorchester in Cologne. Tsvetomir Tsankov is a member of the Orchester der Klangverwaltung Munich and joined the first violins at the Frankfurt Opern- und Museumsorchester in February 2017.