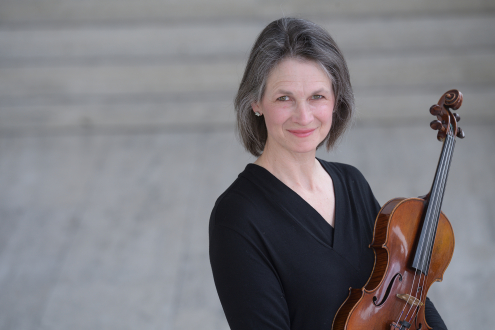 Freya Ritts-Kirby, the youngest of seven children in England, started playing the violin with Faith Whiteley when she was six years old. She later studied violin and viola with David Takeno at the Guildhall School of Music and Drama in London and Juilliard School in New York with Joel Smirnoff and Paul Neubauer. She gained her Master’s Degree at the University of Illinois. Freya Ritts-Kirby won the John Ireland Prize for Chamber Music, the Dr. Elspeth Seaton Memorial Award and E. Nakamichi- and Juilliard Viola competitions. She has performed with London Virtuosi and the English Chamber Orchestra, was a founding memmber of the Aspen Contemporary Ensemble and appeared as a soloist with orchestras including the Lucerne Symphony Orchestra and Orquesta Ciudad de Granada. She then made her way to Germany, where she joined the Ensemble Modern in Frankfurt for nine years, appearing in a great many concerts, on tour, recordings and operatic projects at home and abroad. She then joined the first violins of the Frankfurt Opern- und Museumsorchester and is a much sought-after chamber musician.