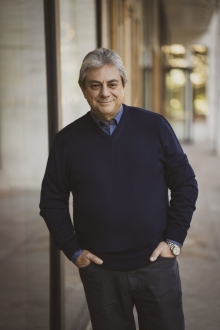 Pier Giorgio Morandi is back in Frankfurt, where he enjoyed great success with Otello, La fanciulla del West, Simon Boccanegra, Madame Butterfly, Boito‘s Mefistofele and Verdi‘s Macbeth, for this run of Rigoletto performances. Future plans include Simon Boccanegra at the Teatro Regio in Turin, Luisa Miller at the Teatro Lirico in Cagliari and Tosca at Greek National Opera in Athens. Recent engagements have included Tosca in Rome, Madama Butterfly at the Met in New York and Don Carlo in Hamburg. In recent seasons he has appeared at theatres including the Vienna State Opera, Zurich Opera, the Deutsche Oper Berlin, Semperoper in Dresden and Arena di Verona. After studying with Leonard Bernstein and Seiji Ozawa and assisting Riccardo Muti and Giuseppe Patané at La Scala Milan, Pier Giorgio Morandi was made Chief Conductor of the Teatro dell’ Opera in Rome in 1989. He later became First Conductor of the Hungarian State Opera in Budapest and Royal Opera in Stockholm.