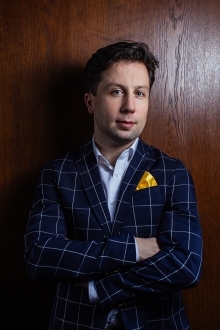 Duisburg born Benjamin Reiners is making his debut at Oper Frankfurt with this Dido and Aeneas / Bluebeard’s Castle double bill. He took up the post of General Music Director in Kiel in 2019/20 where he has conducted many innovative concerts and new productions of Verdi’s Aida, Korngold’s Die tote Stadt / The Dead City and Mozart’s La finta giardiniera. This season plans there include Prokofiev‘s Die Liebe zu den drei Orangen / The Love for Three Oranges, Mozart‘s Die Zauberflöte and Verdi‘s Otello. He studied conducting and church music at the universities for music in Detmold and Cologne before working at the Gärtnerplatz Theater in Munich as a soloists’ coach and Kapellmeister. In 2011/12 he was named 2nd Kapellmeister at Hannover State Opera, and promoted to 1st Kapellmeister two seasons later. He was then appointed Deputy General Music Director and 1st Kapellmeister at the Nationaltheater in Mannheim in 2016/17. He has also appeared with the Deutsche Oper Berlin, Deutsche Oper am Rhein, Oper Graz, the staatstheaters in Darmstadt and Nürnberg, the Rheingau Musik Festival, the Duisburg Philharmonic, the Staatsphilharmonie Rheinland-Pfalz and Munich Radio Orchestra. During the 2021/22 season he makes his debut with the Konzerthaus Orchester Berlin and returns to the Deutsche Oper am Rhein for Le nozze di Figaro. Other engagements include concerts with the Staatsorchester in Darmstadt, the Beethoven Orchester Bonn, Staatskapelle in Weimar, the Neue Philharmonie Westfalen and at the Moravian Autumn Festival in Brno.