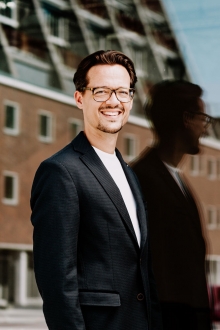 Munich born Florian Erdl appeared at Oper Frankfurt for the first time in 2018/19, conducting Mozart's Die Zauberflöte, he then assisted Sebastian Weigle on Strauss' Capriccio and returned for a performance of Schreker's Der ferne Klang. He took up the posts of 1st Kapellmeister and deputy General Music Director of Theater Pforzheim in 2017, after which he was made temporary General Music Director, conducting works including new productions of Rigoletto, The Bartered Bride and Ariadne auf Naxos in the 2019/20 season. He was 1st Kapellmeister and deputy General Music Director at the Landestheater in Flensburg (2014 – 2017), Kapellmeister at Oper Graz (2012 – 2014) and artistic director of Kammeroper Frankfurt (2009 – 2017). He was also invited to conduct at theatres including the Nationaltheater in Mannheim, the Staatstheater in Schwerin, Oper Kiel and the Landestheater in Innsbruck. Concert work has included appearances with Philharmonie Merck and the Sønderjyllands Symfoniorkester. After studying in Weimar and Munich he assisted people including Christian Thielemann and Bruno Weil, whose star pupil he was. He has been working as a stand in professor for conducting at the University for Music and Theatre in Rostock since March 2020, where he has conducted Mozart's Don Giovanni and numerous symphony concerts.