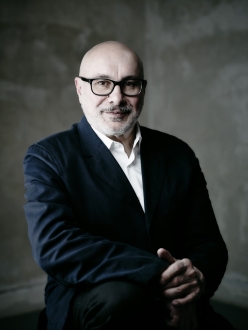 Giuliano Carella was born in Milan and works at many of the world’s leading opera houses. Now he is back in Frankfurt, where he has conducted Stiffelio, I vespri siciliani, Anna Bolena (in concert) and performances of La Traviata, for this new production of Rossini’s Bianca e Falliero. He is a regular guest at the state operas in Stuttgart, where he recently conducted Tosca, Vienna, Munich and Berlin, the Opéra du Capitole de Toulouse, the De Nationale Opera Amsterdam, the Teatro Comunale Bologna, Rossini Opera Festival in Pesaro and Puccini Festival Torre del Lago. His repertoire ranges from Giovanni Paisiello to Lorenzo Ferrero and includes many less well known Italian operas as well the more famous ones. He has led the »I Solisti Veneti« chamber orchestra since 2019 and was General Music Director of the Arena di Verona, from 1998 – 2003, and Opéra de Toulon, until 2017. His recordings of Belcanto works have won many prizes. He studied composition at the Cesare Pollini Conservatoire in Padua and conducting at the »Giuseppe Verdi« conservatoire in Milan and with Franco Ferrara at the Accademia Chigiana di Siena, where he was awarded an honorary degree.