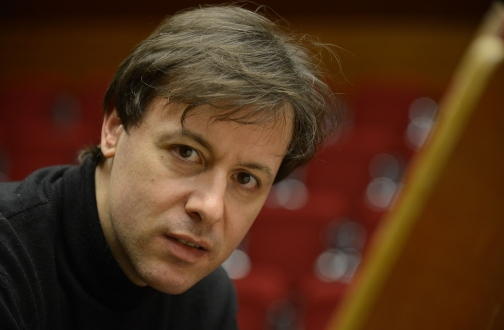 Tito Ceccherini is back at Oper Frankfurt, where he made his debut with The Rake's Progress and conducted new productions of Aus einem Totenhaus/From the House of the Dead, and Bellini's I puritani, for the world premiere of Lucia Ronchetti's Inferno. This Italian conductor has made a name for himself for his interpretations of early 20th century and contemporary works. He has conducted several world premieres, including Fenelon's La Cerisaie at the Opéra National de Paris and Bolschoi Theater in Moscow, Sciarrino's Da gelo a gelo at the Schwetzingen Festival, Klangforum Wien, Opéra National in Paris and Grand Théâtre in Geneva and Superflumina at the Nationaltheater in Mannheim. He recently enjoyed great success with Křenek's Cefalo e Procri and Battistelli's Riccardo III at the Teatro La Fenice in Venice, where he returns next year for Sciarrino's Luci mie traditrici. Other recent engagements have included Béatrice et Bénédict and Die Entführung aus dem Serail at the Théâtre du Capitole in Toulouse, where he enjoyed great success with a double bill of Bartók's Bluebeard's Castle and Dallapiccola's Il prigioniero. Other recent engagements have included Turandot at the Bolschoi in Moscow and performances at the Erl Festival. Recent concert work has included appearances with the Orchestre Philharmonique de Radio France Paris, the BBC Symphony Orchestra, London Philharmonia, Orchester des Teatro dell’Opera di Roma, Filharmonica della Scala, Orchestra Sinfonica di Milano Giuseppe Verdi, the Ensemble Modern, hr(Hessen Radio)-Sinfonieorchester, the WDR-Sinfonieorchester in Cologne, Deutsche Radio Philharmonie in Saarbrücken and the Orchestre de Chambre de Genève.