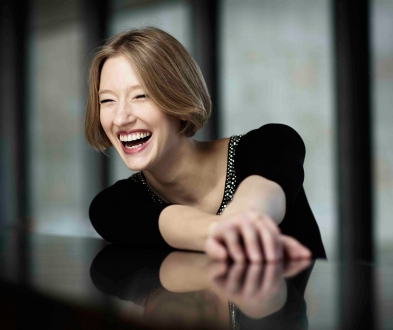 Joana Mallwitz has been General Music Director of the Staatstheater in Nürnberg since 2018/19, where she has conducted new productions of Wagner's Lohengrin, Prokofiev's War and Peace and Verdi's Don Carlos. This season she conducts new productions of Britten‘s Peter Grimes in Nürnberg and Die Zauberflöte, directed by Lydia Steier, at the 2020 Salzburg Festival. She was recently voted »Conductor of the Year 2019« by Opernwelt magazine and »Best Conductor« (Oper! Awards).  She is now back at Oper Frankfurt, following on from Fauré‘s Pénélope earlier this season, for another exciting new production: Salome, directed by Barrie Kosky. She made her house debut with Pelléas et Mélisande which was followed by a new producton of Die lustige Witwe / The Merry Widow (available on CD - OehmsClassics). Recent engagements have included her debut at the Bayerische Staatsoper in 2018, with Eugen Onegin and L’elisir d’amore, Der Rosenkavalier at Norske Opera in Oslo, Macbeth at Zurich Opera and Die Zauberflöte, Macbeth, Cavalleria rusticana / Pagliacci and Der fliegende Holländer / The Flying Dutchman at the Royal Opera in Copenhagen. She has also worked at Hamburg State Opera and Latvian National Opera in Riga. Joana Mallwitz was General Music Director of Theater Erfurt before taking up the same post in Nürnberg. She also enjoys a busy concert career, appearing with orchestras including the City of Birmingham Orchestra, the Philharmonia Orchestra London, the Royal Danish Orchestra, Dresden Philharmonic, the hr(Hessen radio)-Sinfonieorchester, Göteborg Symphony, the SWR Symphonieorchester, Frankfurter Opern- und Museumsorchester, Stuttgart Philharmonic and the Vienna Symphony. Joana Mallwitz embarked on her career as a Kapellmeisterin at Theater Heidelberg.