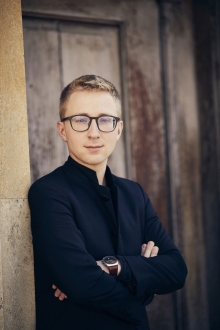 This Graz born conductor, composer and pianist is appearing at Oper Frankfurt for the first time, conducting this revival of La Cenerentola. The beginning of the 2021/22 season marked his appointment as Germany’s youngest General Music Director, of the opera and symphony orchestra in Wuppertal, where productions included Lehár’s Die lustige Witwe / The Merry Widow, Rigoletto and Le nozze di Figaro. He is also 1st Guest Conductor and Artistic Advisor of the Borusan Istanbul Philharmonic Orchestra (BIPO) and 1st Guest Conductor of the Munich Radio Orchestra and works regularly with orchestras including the Munich Philharmonic, the Bavarian Radio Orchestra, the Vienna Symphony and at festivals and opera houses throughout Europe and Asia. Recent highlights have included his debut at De Nationale Opera with a new production of Der Freischütz with the Royal Concertgebouw Orchestra und  his return to the Bayerische Staatsoper in Munich. A jazz wizard, he won awards from the Chicago Jazz Festival and the „Outstanding Soloist Award“ from the University of Wisconsin-La Crosse as best jazz pianist at their 37th annual Jazz Festival. Patrick Hahn was a Conducting Fellow at the 2016 Aspen Music Festival and worked at the Tanglewood Music Center in 2017. A documentary about his exciting conducting career was broadcast on ORF and 3sat in 2020.