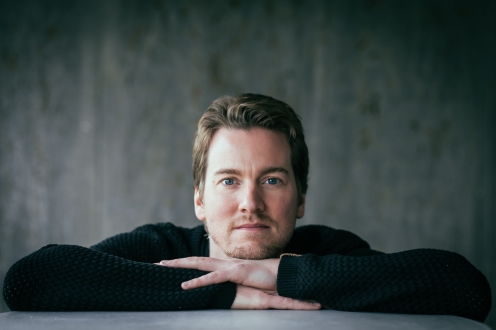 Karsten Januschke's back at Oper Frankfurt, where he began his career as a coach in 2008, was then made a Kapellmeister and built up a broad and varied repertoire, returning recently for productions including Pergolesi’s La serva padrona / Stabat mater, the first performances in Germany of Neuwirth’s Lost Highway, Fioravanti’s Le cantatrici villane and revivals of Dido and Aeneas / Bluebeard’s Castle, Le nozze di Figaro and Rossini’s La gazza ladra, to conduct Handel's Tamerlano and Tchaikovsky's Eugene Onegin. He's just been conducting Cosi fan tutte and Don Giovanni at the National Theatre in Prague. Other recent engagements have included invitations to the New National Theatre in Tokyo (Don Giovanni) and Bayerische Staatsoper in Munich (Der zerbrochene Krug (the Broken Jug) / Der Diktator), productions of the Zirkusprinzessin / Circus Princess at the Gärtnerplatz Theater in Munich and Volksoper in Vienna, where he also conducted Gräfin Mariza, a return to the St. Margarethe Opera Festival and, most recently, Die Zauberflöte at the Staatsoper in Stuttgart and Così fan tutte and Don Giovanni at the National Theatre in Prague. He returns to the Tirol Festival in Erl, where he conducted a new production of Humperdinck’s Königskinder in 2021, this summer for a new production of Chausson’s Le Roi Arthus. Recent concert work has included appearances with the MDR-Sinfonieorchester, the Staatskapelle Halle, the Munich Radio Orchestra, Beethoven Orchester Bonn and the Deutsche Symphonie-Orchester Berlin. Whilst still studying in Vienna Karsten Januschke worked at the Vienna State Opera, Theater an der Wien, and later on the Bayreuth Festival too, assisting conductors including Christian Thielemann and Kirill Petrenko.